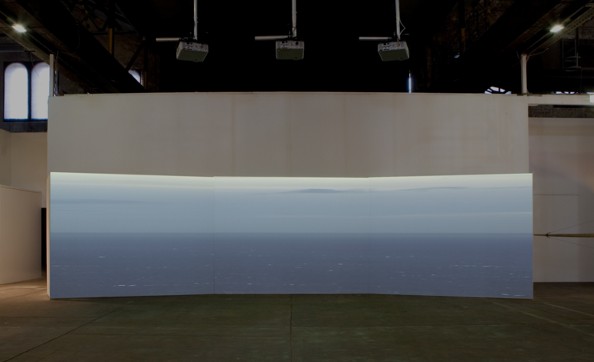 A static camera pointing at the seaside renders a slit-scan sequence of the very same point on the horizon for a full week (24 hours, 7 days). These images were recorded in November 2007 on Oros Harasson - a hill near Finikas on the Greek island Syros. Oros Harasson means: the mountain that inscribes the direction of light. The focus point of the camera followed this direction to the point where the sun sets down onto the horizon during winter solstice...

By assembling the raw material (that just moves in time) back into single images a 'virtual' seaside landscape is constructed. Animating this material to video creates a unique time-lapse sequence of a seascape that tangles the relations of space and time.

As a panoramatic video work it's best shown as a multi-projection installation (As a consequence of the recording process the image material fits seamlessly together. Therefor it is naturally and easy to blow it up to several screens next to each other by just delaying the same video source one frame each or render the raw material to any size of panoramic animations)