"Twelve years prior to 9/11, on November 9, 1989, the Berlin Wall fell. This event seemed to announce a new beginning of the "happy '90s", Francis Fukuyama's utopia of the "end of history," the belief that liberal democracy had, in principle, won out, that the advent of a global liberal community was hovering just around the corner, and that the obstacles to this Hollywood-style ending were merely empirical and contingent (local pockets of resistance whose leaders had no yet grasped that their time was up). September 11, in contrast, symbolized the end of the Clintonite period, and heralded an era in which new walls were seen emerging everywhere: between Israel and the West Bank, around the European Union, along the US-Mexico border, but also within nationstates themselves." (Slavoj Žižek: First as tragedy, then as farce, London/New York: Verso 2009, 3) 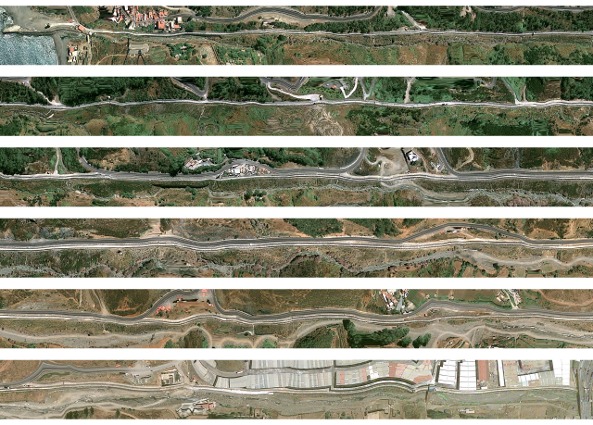 The Ceuta border fence between Morocco and Spain

If you ever walked over the Chinese Wall you know it is an impressive and intriguing building: a huge and absurd monument of fortification. One might think that this medieval structures of exclusion and border protection are outdated for a long time now in the 21st century, or at least since the fall of the Berlin Wall 20 years ago. However that's not the case - walls and separation barriers are booming everywhere.

Most attention went to the Isreali West Bank barrier planned to be around 700km long - around 50% are already built. The US are not only fencing their borders with Mexico, but also building walls to seperate Sunnis fro Shi'its in Bagdad. Even larger attempts happen in India: They are fencing off it's border to Bangladesh as well as to Pakistan... The list goes on and on (see references below). So what about Europe? "Luckily" Europe has the Mediterranean Sea as a natural barrier to the South that keeps off most unwanted immigrants, but it has a few human-made barriers as well surrounding the Spanish enclaves in Morocco. Greece has plans to fortify it's borders to Turkey(but likely no money at the moment), whereas Bulgaria dropped its plans to rebuild the communist border fortification against Turkey - at least for now.

Compared to the Chinese Wall, those contemporary barriers are ugly and unpleasing buildings: just blocks of concrete or fences with barbed wire, certainly equipped with sophisticated electronics and sensors. Yet I am afraid there are more to come as a heating planet will likely increase the demand for structures of exclusion, protection and fortification.

I used my aerial push-broom scanner (originally developed for What If You Would Pull Rivers To A Straight Line?) to trace a few of them. The very first results can be seen here.

Separation Barriers on wikipedia
BBC News: Walls around the World
Border to Border, Wall to Wall, Fence to Fence

The Melilla border fence between Morocco and Spain 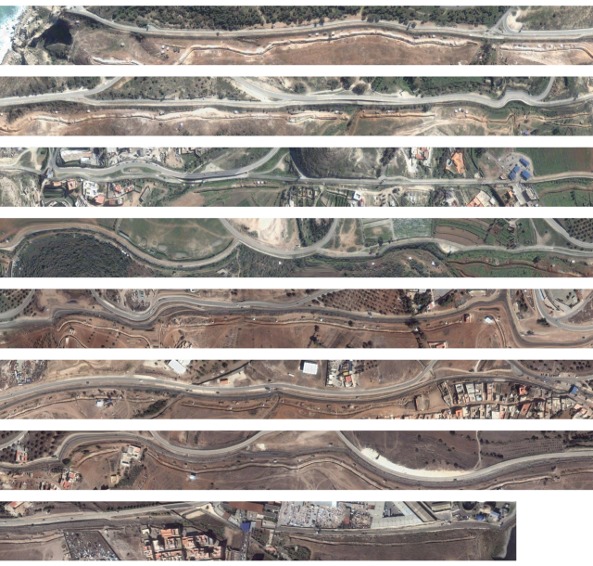 The Melilla border fence between Morocco and Spain 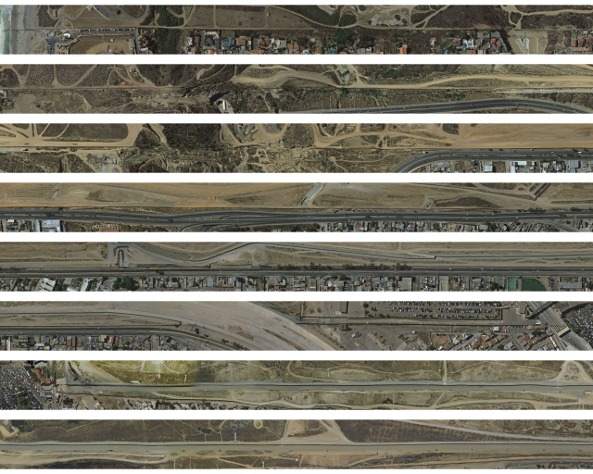 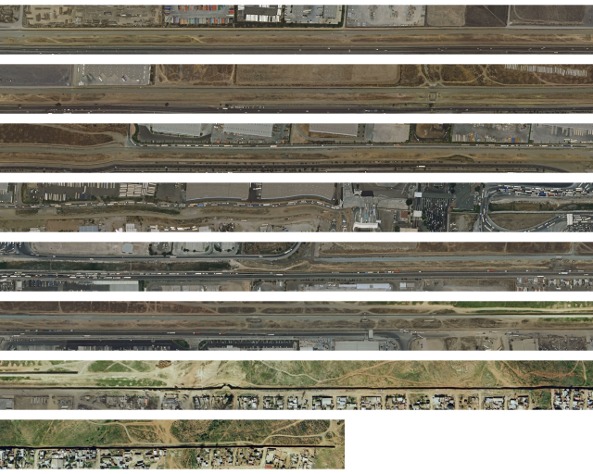 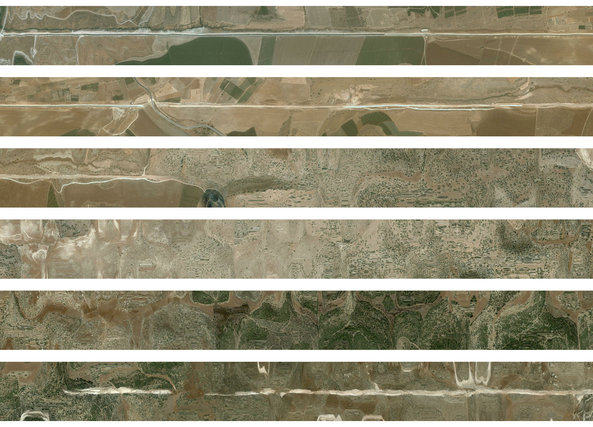 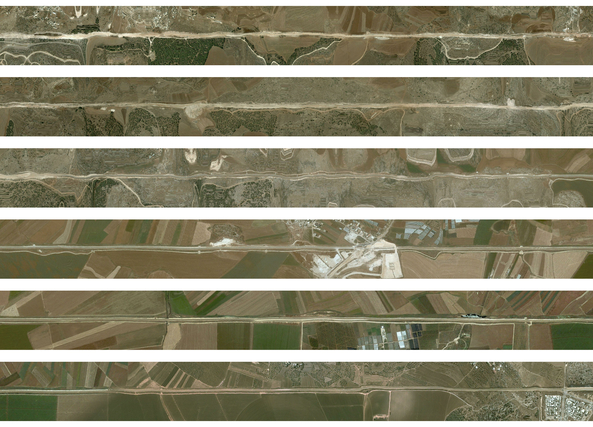 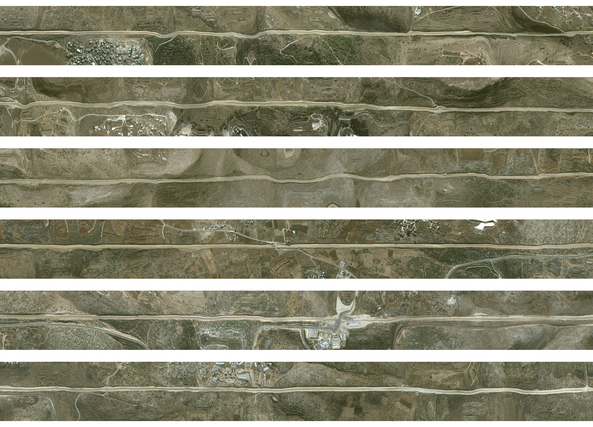 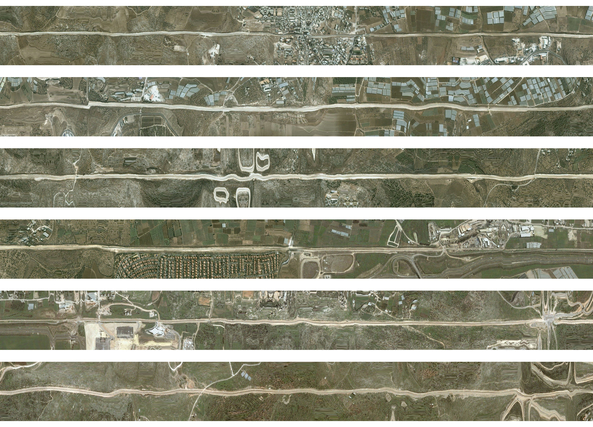 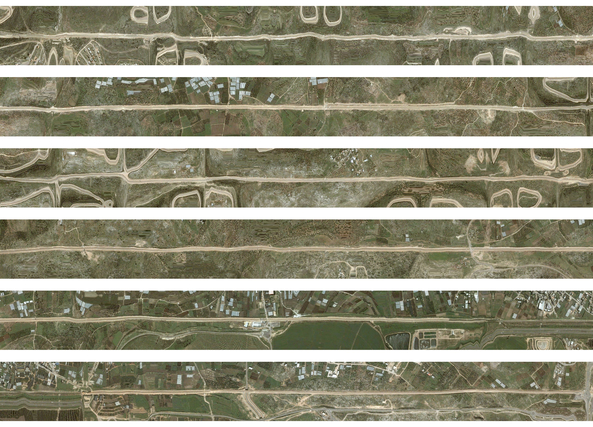 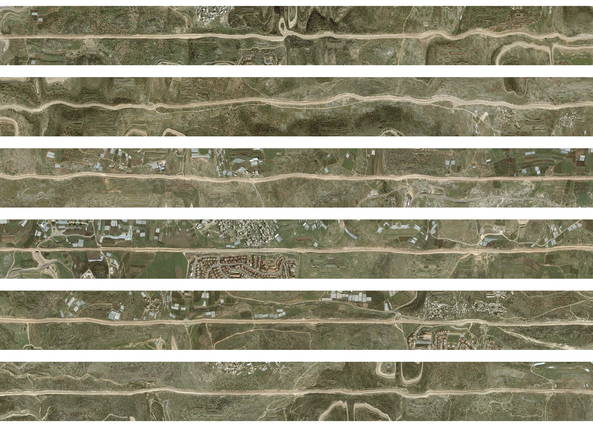 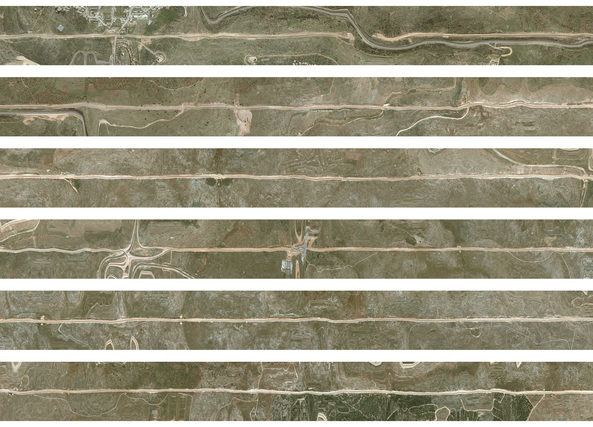 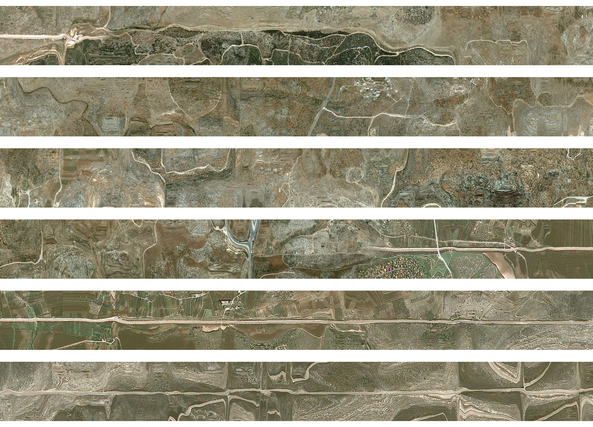 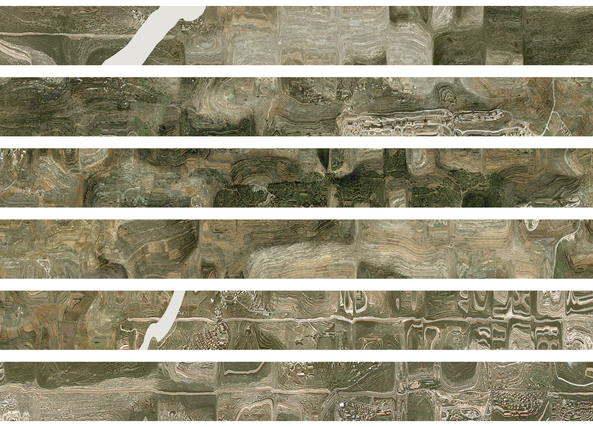 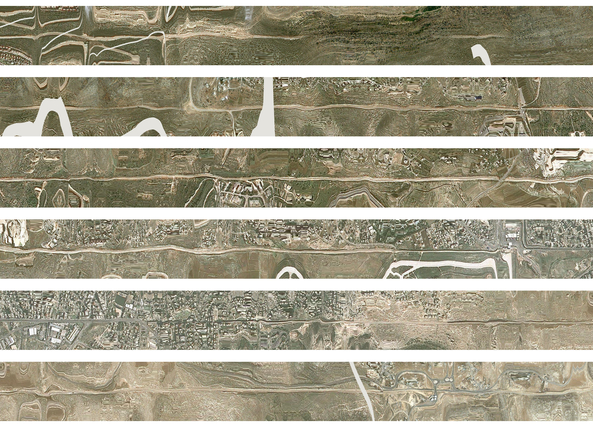 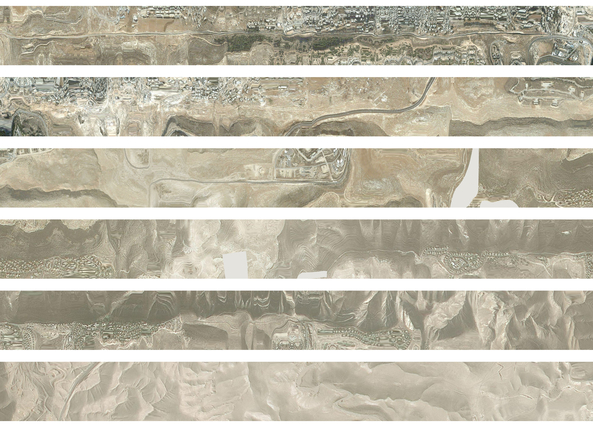 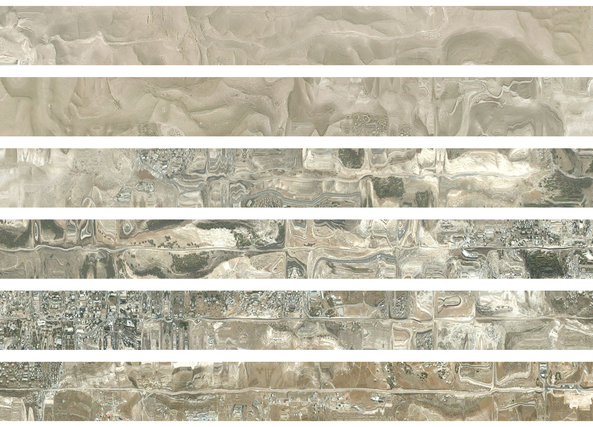 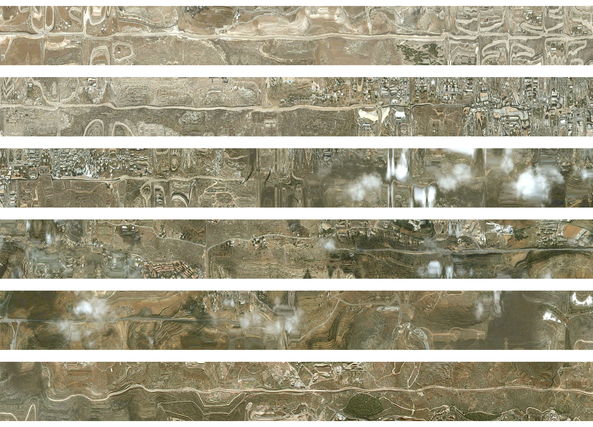 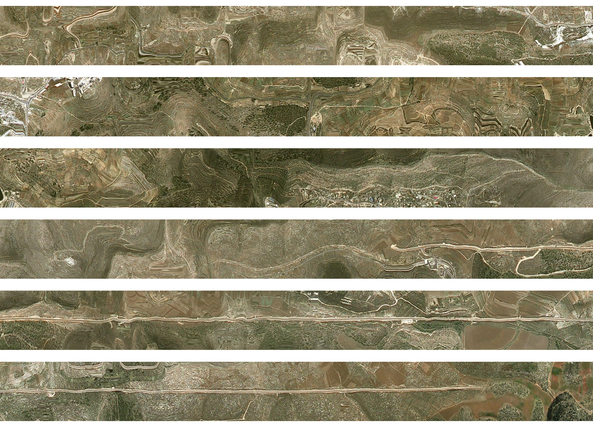 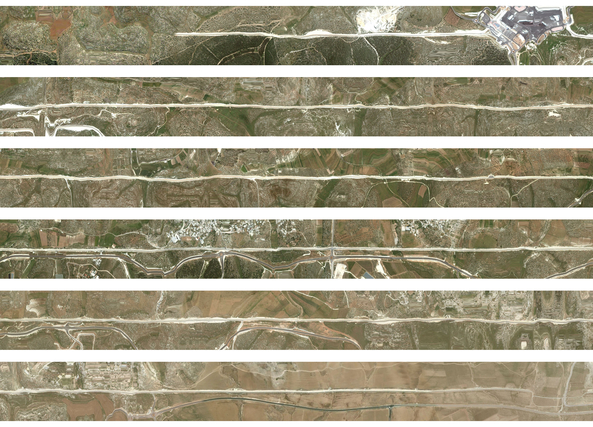 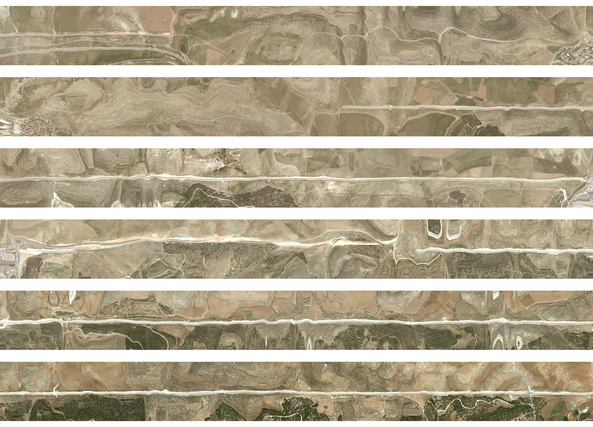 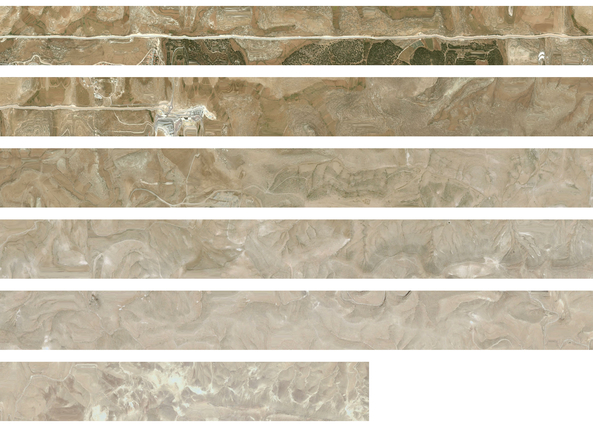